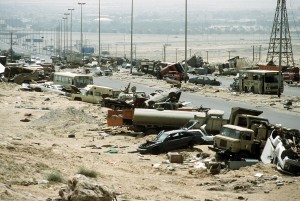 On the night between 26 and 27 of February 1991 a massacre took place on highway 80 in Kuwait. Thousands of Iraqis had been caught in a long convoy while retreating to the Iraqi border. American airplanes had first blasted (mostly civilian) vehicles, which had definitely been stolen from Kuwaitis, in the front and rear of the convoy on the road to Abdaly. The trapped convoy was then bombed relentlessly by wave after wave of attach aircraft, Warthog, and Apache helicopters with cluster bombs, missiles and machine gun fire. That has been called Turkey Shoot afterwards.

A completely misled US Warthog pilot told reporters a couple of days after the war crime enthusiastically,

“There’s just nothing like it, … “It’s the biggest Fourth of July show you’ve ever seen, and to see those tanks just go ‘boom,’ and more stuff just keep spewing out of them and shells flying out to the ground, they just became white hot. It’s wonderful.”

Then Commander of “Operation Desert Storm”, “Stormin’ Norman” Schwarzkopf, who had died yesterday from complications after pneumonia at age 78, justified the death of up to ten thousand Iraqis in an interview aired in January 1996,

“Why did we bomb them? Because there was a great deal of military equipment on that highway. I had given orders to all of my commanders that I wanted every piece of Iraqi equipment that we possibly could destroyed. This was not a bunch of innocent people just trying to make their way back across the border to Iraq. This was a bunch of- of rapists, murderers and thugs who had raped and pillaged downtown Kuwait City and now were trying to get out of the country before they were caught.” (Emphasis added)

Rapists, murderers and thugs, sort of people involved in any war, I am afraid. You may see the kind of vehicles on what is now known as Highway of Death, including transport buses and indeed one tank, on the picture above. American film director Sam Mendes had used pictures of the incinerated bodies in burnt-out vehicles which had been encountered, after the act, by clueless and bored, unavailingly trigger-happy American ground soldiers in a drama scene of his moderately apt Jarhead of 2005.

The second Gulf War (after the Iran-Iraq war of the 1980s) then lasted for twenty years. Kuwaitis have cleaned up the site in the meanwhile, and when leaving Kuwait City and driving either north toward Abdaly or east to Bubiyan Island (another American target on that particular night), no conspicuous wreckage would be visible anymore.