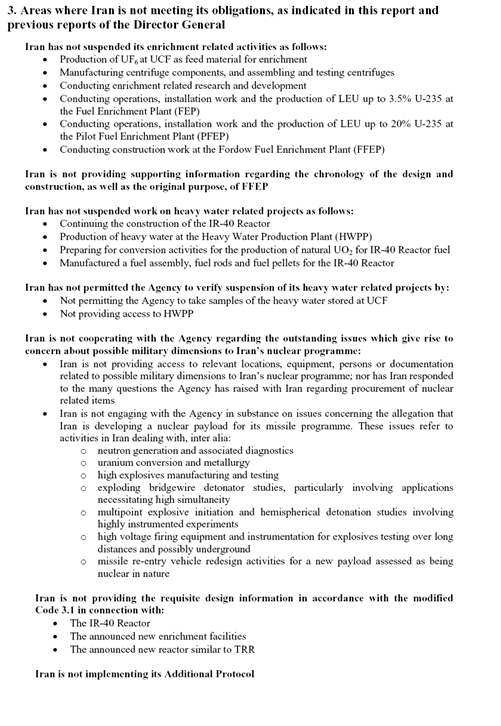 In the absence of constructive talks (those of world powers P5+1 and Iran in January in Istanbul must be considered a fiasco) positions as regards Iran’s nuclear program won’t change. The International Atomic Energy Agency (IAEA) has established itself independently of the United Nations and cannot enforce UN Security Council resolutions. It investigates the status quo and reports to the latter and the UN General Assembly. IAEA Director General Yukiya Amano’s impatience with Iran might be understandable. But this time he tends to pillory a member state. Amano’s latest report on Iran lists, as a novelty and in greater detail, areas where Iran does not meet its obligations “as indicated in this reports and previous reports of the Director General.”

Well, insisting time and again that Iran has to halt its allegedly (un)peaceful nuclear program isn’t very much diplomatic and definitely won’t lead anywhere. Just ignoring the fact that Iran interprets its withdrawal from voluntarily implemented, but never ratified in the Majles, Additional Protocols and modified Code 3.1 during the period between late 2003 and 2006 and 2007, respectively, when the IAEA had “referred the case” of Iran’s nuclear program to the UN Security Council differently doesn’t make it better. Nor does insisting of giving up uranium enrichment. The latest report may almost be considered as a gruff request for Iran leaving the Nuclear Non-proliferation Treaty (NPT) of which the country is a signatory since 1968.

If Iran doesn’t have to hide any military dimension of its nuclear program, something what it doesn’t get tired to emphasize (while the West doesn’t get tired to pretend the opposite), why then not ratify its Additional Protocol and modified Code 3.1 subsidiary agreement which would only help to earn some confidence? That and the immediate lifting of UN sanctions should have been on the agenda in Istanbul; rather than the dead as a dodo nuclear swap deal.

Update. In a letter to the IAEA  Board of Governors in March 2010, Iran’s Ambassador to the IAEA Ali Asghar Soltanieh had responded to similar language in Amano’s first report on Iran’s nuclear program and explained, inter alia, that design information on nuclear facilities will be provided to the IAEA according to Code 3.1 of the NPT of 1976, i.e., 180 days before becoming operational.

Update II. The most surprising move regarding Iran’s never-ending story about Bushehr’s light water reactor which was about to go online this month happened, according to Amano’s report, on Wednesday this week, when the IAEA  was informed that  Iran would have to unload fuel assemblies from the reactor’s core. A body blow for Iran’s peaceful nuclear program. The news came just one week after inspectors had visited the site. Iranian officials have largely denied that the malware Stuxnet may have infected the Bushehr reactor and caused major damage. The New York Times reports today that Russian experts have repeatedly expressed concern that, if infected, the reactor may run a high risk for a nuclear disaster.