No Place To Hide

At the outset of his new book, Glenn Greenwald quotes Senator Frank Church’s 1975 statement, who was critically assessing intelligence activities in the U.S.,

“The United States government has perfected a technological capability that enables us to monitor the message that go through the air. …That capability at any time could be turned around on the American people, and no American would have any privacy left, such is the capability to monitor everything – telephone conversations, telegrams, it doesn’t matter. There would be no place to hide.”

What Edward Snowden has revealed last year in Hong Kong and what Glenn Greenwald and Laura Poitras had amplified in relentless articles since, first in the Guardian, then in a new, but still largely under construction, enterprise co-founded by Greenwald, The Intercept, and, to a lesser extent the Washington Post and other media outlets such as Germany’s Der Spiegel, proves that it has turned meanwhile against Americans and, more important, all of us. Benthem’s Panopticon is, it seems, reality. And regardless of whether the U.S. has developed into a totalitarian state (there are strong indications; to list a few, its claim to rightfully and authoritarian act as a single superpower, the endless war on an ill-defined concept such as terrorism, relentless persecution of whistle-blowers, even journalists, despite claiming otherwise, a global assissination campaign targeting even “radical” American citizens; all in the aftermath of the 9-11 attacks on U.S. soil) Orwell’s worst apprehensions have undoubtedly become true. I vividly remember, when having seen Tony Scott’s Enemy of the State of 1998, that I had considered NSA officers’ wrongdoings as absurd exaggeration. But was is done right now is exactly what is decribed in the movie. Or worse.

Greenwald’s book begins as a spy thriller, and it is said that this part will probably serve as screenplay for a Hollywood movie. There is drama in Greenwald’s and Poitras’ journey to Hong Kong but Greenwald hyperbolizes. His outright beatification of Edward Snowden is not very credible. Snowden might indeed be an idealist. But what is missing in Greenwald’s narrative is complete lack of any desperation of somebody who has decided to live as state enemy in hiding forever. That Greenwald did not identify the ominous “Cincinnatus” as “the source” in the first place even after he had got to know Snowden in person is not credible either. Greenwald continues with the malicious obsession of mainly former head of the NSA, General Keith Alexander, to “collect it all” and how he and his buddies are going to do that while severely violating the U.S. Constitution’s Fourth Amendment. I was wondering to what kind of audience the numerous, sometimes gawkish, power point slides were shown, who was to be convinced or trained (specifially in what?) or bored in lenghty lectures. All Noforn and Top secret, of course. 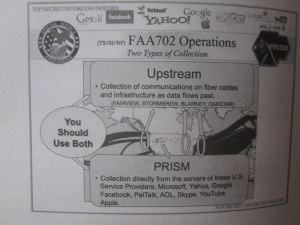 “You Should Use Both” (Upstream and PRISM) sounds like a well-intentioned tip of an elementary school teacher. For what purpose? Apparently (and embarrassingly), NSA total surveillance has not prevented a single terrorist assault. Let alone criminal acts. That’s what I actually would expect first. Greenwald continues with some philosophical and probably rather superfluous excursion on why total surveillance is deleterious for any vital democracy. That is something here in Europe is known since Nazi and Stalin terror regimes and DDR Stasi. Greenwald is probably right that attempts by NSA and its British counterpart GCHQ to “sniff it all” and “collect it all” must not be regarded harmless given the complete ineffectiveness to prevent terror and crimes. Prevention of terror is thus not the main motive, just a pretext. It is hoped that, in the medium run, any United States government cannot afford to spy on its citizens. On the other hand, U.S. citizens seem to be rather apathetically when it comes to government wrongdoings. What is also of concern is outright appeasement of strong allies such as the German government which seems to be unwilling to show the Obama administration its limits, for instance by granting Edward Snowden asylum. Greenwald continues with his, sad to say, rather justified revile of mainstream media which, with anticipatory obediency, have rather fired the gun at the messenger (Snowden and Greenwald) instead of the NSA. And which no longer are basically adversarial to governments, which is vital for any democracy. The Fourth Estate. Endnotes and and index have been omitted from the text, they can only be found online, just 30 pages which should have been included in the book.