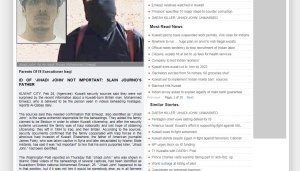 While the Guardian newspaper reports today that his former boss in an unnamed Kuwaiti IT company has praised Mohammed Emwazi’s skills and manners (“He was the best employee we ever had, … He was very good with people. Calm and decent. He came to our door and gave us his CV… How could someone as calm and quiet as him become like the man who we saw on the news? It’s just not logical that he could be this guy.”), Kuwaits English-language tabloid Arab Times still tries to conceal that the Kuwaiti born was living, at least for some time, in Kuwait. His parents (“Bedoun, stateless Kuwaitis, having joined Iraqis in Saddam’s onslaught on Kuwait in 1990“) are apparently surveyed and harrassed by authorities.

Emwazi, then 21 years of age, left Kuwait in 2010 for London after a 3-month “stellar probationary period” at the above IT company.

Update March 3, 2015. With some delay, Arab Times informed their readers today about the Kuwaiti epidsode in 2010 at an unnamed IT company of Daesh killer Emwazi.