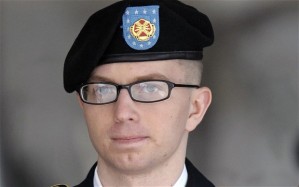 As expected, an example was made when Pfc Bradley Manning was convicted today for 20 charges including espionage but not for “aiding the enemy”. Leaking material which demonstrates a government’s wrongdoings and even war crimes is a risky business. Manning has leaked material on the Iraq and Afghanistan wars which will keep historians busy for decades. The shocking targeted killing of unarmed civilians in 2007 in Baghdad in an Apache helicopter attack is still unatoned. Some of the leaked U.S. diplomatic cables may in fact have sparked the Arab Spring.

Manning pays a high price. Until his court martial commenced he was detained for three years, at times under circumstances which had been condemned by Amnesty International as torture. He will now most probably stay behind bars for the rest of his life.

This entry was posted in USA and tagged aiding the enemy, Bradley Manning, WikiLeaks. Bookmark the permalink.