Maxwell (d. 1879) had used three subsequent exposures with red, green and blue filters, respectively. The three images were reversal developed to form three color separating transparencies which could be projected with filtered lanterns on a screen with three different projectors forming a full-colored image when in focus.

Walter Frankhauser, a photographer contracted by the U.S. Library of Congress, cleaned up about 120 of the original high-resolution scans which show a world, now gone, before World War I and the Russian Revolution. They can be seen in an online exhibition.

See, for instance, the picture below, Jewish children with their teacher in Samarkand, now Uzbekistan (1911).  From the website:

“Samarkand, an ancient commercial, intellectual, and spiritual center on the Silk Road from Europe to China, developed a remarkably diverse population, including Tajiks, Persians, Uzbeks, Arabs, Jews, and Russians. Samarkand, and all of West Turkestan, was incorporated into the Russian Empire in the middle of the nineteenth century and has retained its ethnic diversity up to the present. Prokudin-Gorskii captures here a group of Jewish boys, in traditional dress, studying with their teacher.”

The picture below shows a Sart woman in purdah in Samarkand, ca. 1910. Until the Russian revolution of 1917, “Sart” was the name for Uzbeks living in Kazakhstan.

A boy in the court of Tillia-Kari mosque in Samarkand, ca. 1910. These pictures have breathtaking resolution and give an unreal impression due to their bright colors, other than, for example, rare original photographs of the 19th century in Vitaly Naumkin’s Bukhara (from the Caught in Time: Great Photographic Archives series). 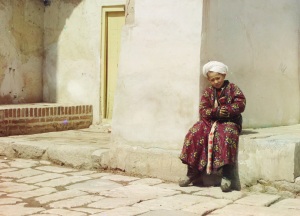