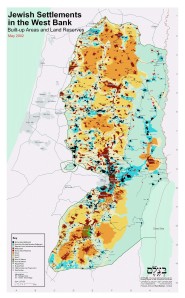 Israel’s Foreign Minister Avigdor Lieberman has reportedly surprised his Premier Benjamin Netanyahu when briefing him about his own map of Palestine he had drawn in provisional borders. Apparently, Lieberman believes that we believe that once a state has provisionally been established one might negotiate further adjustments (or not). He was well advised not to make the map public.

As Ha’aretz reports, Lieberman has suggested that, by taking the diplomatic initiative by proposing a Palestinian state in provisional borders, “this would preempt international recognition of such a state in the 1967 borders, reduce international pressure on Israel and transfer at least part of the state to the Palestinians,” an official has reported; emphasis added. Indeed, Israel may have nothing more to fear (apart from nuclear Iran) than the current trend of recognizing Palestine in 1967 borders.

The unnamed official said that Lieberman’s map also “includes a network of new roads linking the areas under Palestinian control. The map ‘provides territorial contiguity that would enable the Palestinian state in provisional borders to be viable,’ he said.”

“Lieberman’s plan, which corresponds to the second stage of the 2003 U.S.-sponsored road map peace plan, would not involve evacuating settlements or transferring significant additional territory to the PA. Thus the new state’s provisional borders would comprise mainly the parts of the West Bank known as Areas A and B. The PA currently has full control over Area A, and civilian but not security control in Area B.”

Although most probably nobody else than Lieberman has seen the drawing so far, it was immediately rejected and labeled as “invention and joke” by chief Palestinian negotiator Saeb Erekat.

Since the beginning of the colonial age drawing maps has especially been popular in the Middle East, frequently with just a ruler. One lesson learned after centuries of war might have been asking the simple question, Why don’t we ask the people?

But what is just simple in this complicated world?

This entry was posted in Israel, Palestine and tagged 2003 Road Map, Avigdor Lieberman, Benjamin Netanyahu, Palestine wiped off the map. Bookmark the permalink.