Almost a Significant Emotional Event (After 9-11) 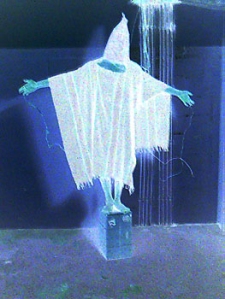 Thanks to Democracy Now!. Last week, pictures were broadcast by CBS which shocked the world. I still consider them one of the Significant Emotional Events* in my whole life. I have written about my whereabouts on that very day five years ago, and today I feel much grief.

Where had I been then? Well, I was a tourist visiting Damascus, Syria. I have actually written about the trip five years ago. Here is a brief excerpt. Pictures of Damascus in 2004 can be seen here.

Where had I been in late April 2004? I remember (as an almost significant emotional event) an afternoon in Damascus. I had invited an Iraqi Professor of Geophysics to my room in the Cham Hotel. I was a tourist, and he had just brought his family with the car from Holland, where he worked, to Baghdad. Right now, he was on his way back to Amsterdam in order to quit his job and then permanently move to Iraq. He had some hope of getting a position at Baghdad University. The stopover in Damascus provided him with the opportunity of visiting some of Islam’s holiest places.

Dr. Saad had noticed me when entering the Umayyad Mosque, one of the most awesome buildings in the Islamic world. It was my first visit of a mosque ever, and I had been stumbling into the smooth as glass-like courtyard, when I suddenly heard his warning: “Better remove your shoes!” With an apology I did, and when I entered the gorgeous prayer hall itself, I met him again.

We chatted, about Kuwait, Iraq, Holland, Germany. Besides tourists, many families with their children were visiting the mosque. Adults were talking and kids playing. Some people prayed in groups, others alone. The stained glass windows, allowing streams of sunlight coming in, almost reminded me of a church. In fact, this is the haram for St. John the Baptist’s shrine (now one of the prophets of Islam), which can be visited in a prominent place in the mosque. During the period of 706 through 715 CE, the Umayyad Caliph Al-Walid I reconstructed (rather than demolished) the once Christian church into one of Islam’s most significant mosques. But one minaret still reminds one more of a church tower. Pope John Paul II had visited the site in 2001.

Dr. Saad, who hasn’t been in Damascus either, suggested that we can learn more about the city when strolling together through the streets. After we had left the Umayyad Mosque, we visited the Holy Shrine of Imam Husayn’s little daughter Ruqaiyyah, and I saw the plenty of toys in her grilled little tomb. The next day, Friday, we went to Lady Zaynab’s shrine in the vicinity of Damascus, a sister of Husayn who had survived the Battle at Karbala in the 7th century. For the first time, I participated, as a calm observer, in the Friday prayers.

Back in the hotel, we switched-on the TV and suddenly, he asked the most disturbing question: “Do you understand what you see there?” I didn’t. It was a report on an incredible crime in, one has to call it, a dungeon in Baghdad, called Abu Ghuraib. Only days later, when back in Kuwait, I began to realize what was soon considered the day, when G. W. Bush lost the war in Iraq. It was almost a significant emotional event, one which you never forget in your life. Dr. Saad and I went also to the Anti-Lebanon Range and to small villages where rich Syrians (and also rich Kuwaitis) keep their chalets as summer getaways.

What has happened to the Iraqi Professor? He has moved his family back to Holland. A life in Baghdad is no longer possible, he recently told me on the telephone. Alhamdulillah, he has now got a position at Delft University.

* A Significant Emotional Event (SEE) is an experience (or experiences) that creates an emotional meaning which affects us in later life. Examples may be 9/11, the assassination of JFK, the sudden loss of loved ones, maybe a cancer diagnosis.
5 May 2014 @ 6:20 pm.
Last modified May 5, 2014.