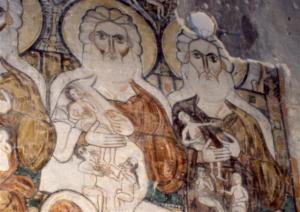 In the May 2008 issue of New English Review, Ibn Warraq briefly reports on the proceedings of an “Inarah Conference On the Early History of Islam And the Koran” earlier this year in Otzenhausen, Germany. The well-known ‘revisionists’ had been gathering there in order to express their ‘disturbance’ about “the fact that Christoph Luxenberg’s insights were not discussed by other Islamologists because of their implications for the traditional history of the Koran.”

Elsewhere, I had recently written, with regard to the upcoming English translation of Ohlig and Puin’s book about the hidden origins of Islam:

“Famous German orientalists Tilman Nagel and Angelika Neuwirth criticized the approach of, in particular, Christoph Luxenberg, and his new interpretation of the oldest still visible Qur’anic inscriptions on the Dome of the Rock in Jerusalem may in fact be very peculiar. As an example, Luxenberg reads muhammad and abdullah not as nouns but rather gerundives (the praised one, the servant, respectively) and assigns both to Jesus (Isa bin Maryam) rather than to the Prophet of Islam, Muhammad.”

It might actually be stated that Luxenberg’s approach of re-reading the Qur’an, and his implications are not really compatible with sound scientific research but rather highly speculative. How his methods may have misled other scholars may be illustrated by Ibn Warraq’s mentioning of the presentation of Dr. Christoph Heger:

“Christoph Heger, convinced of the validity of Christoph Luxenberg and Volker Popp’s thesis that early documents, inscriptions and coins that contain the terms “muhammad” and “ali” should not be understood as proper names of the putatively historical figures of Islamic historiography but as honorific titles of Jesus Christ, argued that confirmation of the said thesis could be found in the old text of an inscription of a talisman in the possession of Tewfik Canaan. The text of the talisman should be read as:
“O healer, O God! Help from God and near victory and good tiding of the believers! O praised one [muhammad], O merciful one, O benefactor. There is no young man like the high one [‘ali] and no sword like the two-edged sword of the high one. O God, O living one, O eternal one, O Lord of majesty and honor, O merciful one, O compassionate one”.
This text should be understood as an invocation of Jesus Christ – the healer, the good tiding, the praised, merciful and high one, the young hero, “out of the mouth [of whom] went a sharp two-edged sword” [Apoc. 1:16], namely “the word of God,” which is “sharper than any two-edged sword” [Hebrews 4:12].”

This is, of course, untenable. One gets in fact the impression of circular reasoning. Have a look at the kind of amulets Tawfiq Canaan, a rather famous collector of Palestinian folk art, had described.

The respective publication of Dr. Heger with the title “yā muḥammad“– no „o Mohammed!” may be found here.