According to official announcements, the incumbent Iranian president Mahmoud Ahmadinejad had won the election with 62.6% of the votes while his main challenger, former prime minister and reformist Mir Hossein Mousavi, yielded a disappointing 33.8%. The two other candidates, former speaker of the parliament Mehdi Karroubi and former Pasdaran commander Mohsen Rezai only became also-runs.

There have quickly been claims of rigged election results in Iran and massive fraud. While Mr. Mousavi did not use this particular word, he talked about a charade. In western media, a graph circulates which seem to provide indisputable evidence of rigged results. Data are derived from six announcements of incoming voters’ counts of the Ministry of Interior itself. The data (cumulative voters counts for Mr. Mousavi and cumulative counts for Mr. Ahmadinejad), if displayed in a scatter plot, show that the incumbent president always got about twice as many votes as his rival. A regression line is provided and an R2 of 0.998 calculated for the correlation.

This analysis is, of course, nonsense. It cannot prove that the Iranian presidential election was fraudulent. A charming example from the recent U.S. American election by Nate Silver is provided here. He supposed that voters’ results are announced in a similar fashion as those from the Iranian Ministry of Interior, i.e., in six large waves. For example:

See the graph below. An R2 of 0.996 can be calculated which is, of course, complete nonsense. No proof for election fraud at all. Simply due to violating fundamental assumptions in linear regression. 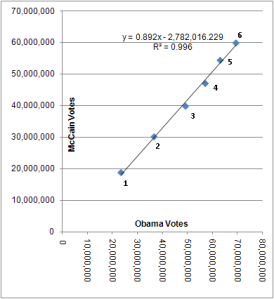 What is dangerous here is that journalists, who should have some basic skills in mathematics and in particular statistics, spread, intentionally or unintentionally, wrong, in fact fraudulent, information.