Julian Assange Had Been Targeted Before 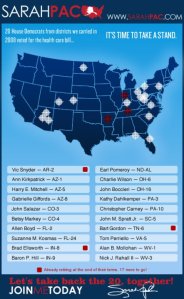 Tea Party and SarahPac (sic!) lunatic Sarah Palin had, before she has put American democrats into crosshairs for voting for the health care bill, already targeted Julian Assange, denouncing him as an Al Qaeda-like terrorist.

“Assange is not a ‘journalist,’ any more than the ‘editor’ of al Qaeda’a new English language magazin Inspire is a ‘journalist.

“He is an anti-American operative with blood on his hands.”

The former is, as usual in Palin’s case, difficult to comprehend, the latter, of course, nonsense. But what about Palin herself? After six people have been killed in the Arizona shooting by another ‘White Terrorist’, Jared Lee Loughner, which targeted, as far as we know, Democratic Representative Gabrielle Giffords (see Palin’s poster), whose condition is still critical.