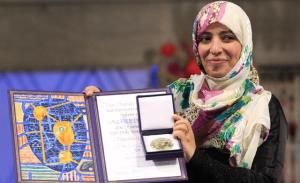 With Tawakkul Karman, the Norwegian Nobel Price committee has revised its wrong decision of 2009. At least, she deserves. What a great choice. What a beautiful woman.

Anyway, it’s Norwegian hubris at its best. The real candidates this year, besides Tawakkul,  were Julian Assange and Bradley Manning.

Disempower Jagland and his ridiculous committee.

Update December 14, 2011. See her speech during the ceremony, provided by Democracy Now! here.