The Root of Evil 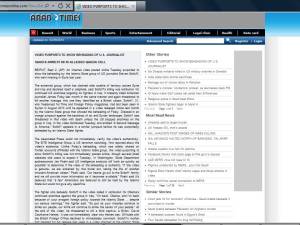 The on-video beheading of freelance reporter Steven Sotloff by the same murderer who had severed already the head of freelance photo reporter James Foley last month (I haven’t seen either but rely on respective news by mainstream media) has sparked even more worldwide abhorrence. The aim of these barbaric acts by criminals of a self-proclaimed “Islamic State”, IS or ISIS, seems to be clear, draw Barack Obama back into the Middle East for another military adventure in Syria/Iraq. As tragic these killings are, freelancers should know that they may meet their fate when reporting in war zones.

Having lived for couple of years in the Middle East, I wondered whether these beheadings were covered by Kuwaiti tabloid Arab Times. Well, they were. An AP note was repeated. No commentary, no comments (as usual, Kuwait has no free press or freedom of speech and if and when opinions in Arab Times are expressed names are usually “withheld”). 386 online viewers had read it. What is interesting is the list of “Similar Stories” in the column to the right. It is a massacre.

This goes on and on. Human Right Watch reported that, in a surge of beheadings in the period between 4 and 20 August, 19 delinquents were executed in Saudi Arabia. Offences that resulted in death penalties and resulted in subsequent beheadings ranged from drug trafficking to sorcery (sic!). (No mistake, any execution, including recent botched executions in the U.S. or public hangings in Kuwait, are absolutely inhumane and need to be sanctioned by all civilized nations).

As far as we know, IS is basically financed by super-rich private donors in Kuwait, Qatar and Saudi Arabia, the latter being the main sponsor of Salafi jihadist terrorist groups including al-Qaeda. All autocracies are primary allies of the U.S. in the Middle East. Rather than retaliate militarily in an extremely uncertain endeavour, Obama is better advised to rethink the relationship with top sponsors of terrorism.

As for the Israel lobby, support for dubious allies in the Islamic world sooner or later backfires.