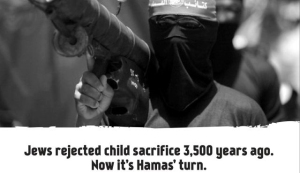 In the midst of the current and ongoing assault on Gaza, chief holocaust industrialist Elie Wiesel had written an ad which has been run in major U.S. and U.K. news outlets including The New York Times, The Washington Post, The Wallstreet Journal and The Guardian. The London Times had refused to print it. The ad was organized and paid for by This World: The Values Network, an organization founded by radical orthodox rabbi Shmuley Boteach.

After centuries if not millenia of anti-Semitic blood libel, Elie Wiesel’s ad starts with a similar accusation against Hamas: “Now it’s Hamas’ turn.” It is worth to quote from Wiesel’s essay at length.

“In my own lifetime, I have seen Jewish children thrown into the fire. And now I have seen Muslim children used as human shields, in both cases, by worshippers of death cults indistinguishable from that of the Molochites.

“Moderate men and women of faith, whether that faith is in God or man, must shift their criticism from the Israeli soldiers – whose terrible choice is to fire and risk harming human shields, or hold their fire and risk the death of their loved ones – to the terrorists who have taken away all choice from the Palestinian children of Gaza.”

The emerging trend of blaming the victim sounds like Joseph Goebbels’ rant “Die Juden sind schuld!” some 73 years ago.

Luckily, fortyJewish holocaust survivors and 287 of their descendants stood up today. In an open letter they have condemned Israeli acts in Gaza and expressed disgust of Wiesel’s exploit of the holocaust.

As Jewish survivors and descendants of survivors and victims of the Nazi genocide we unequivocally condemn the massacre of Palestinians in Gaza and the ongoing occupation and colonization of historic Palestine. We further condemn the United States for providing Israel with the funding to carry out the attack, and Western states more generally for using their diplomatic muscle to protect Israel from condemnation. Genocide begins with the silence of the world.

We are alarmed by the extreme, racist dehumanization of Palestinians in Israeli society, which has reached a fever-pitch. In Israel, politicians and pundits in The Times of Israel and The Jerusalem Post have called openly for genocide of Palestinians and right-wing Israelis are adopting Neo-Nazi insignia.

Furthermore, we are disgusted and outraged by Elie Wiesel’s abuse of our history in these pages to justify the unjustifiable: Israel’s wholesale effort to destroy Gaza and the murder of more than 2,000 Palestinians, including many hundreds of children. Nothing can justify bombing UN shelters, homes, hospitals and universities. Nothing can justify depriving people of electricity and water.

We must raise our collective voices and use our collective power to bring about an end to all forms of racism, including the ongoing genocide of Palestinian people. We call for an immediate end to the siege against and blockade of Gaza. We call for the full economic, cultural and academic boycott of Israel. ‘Never again’ must mean NEVER AGAIN FOR ANYONE!”

In his explanation why Jews reject child sacrifice for more than 3500 years, Elie Wiesel consults Akedát Yitzḥák, one of the Bible’s numerous most disturbing legends, the Binding of Isaac (Genesis 22:1-18). In order to test his loyalty, God demanded the sacrifice while Abraham apparently obeyed. He was only stopped by God’s angel. He did not reject the bizarre call, he apparently accepted it. Wiesel claims, in his ad, that with this narrative, “monotheism and western civilization begin[s].”

Well, when asked what he thought of western civilization, Mahatma Ghandi replied, “I think that would be a good idea.”