Medical Information Transfer into Practice in the 21st Century: A Revolution 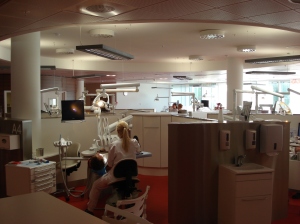 When having recently been asked to write an op-ed, I was wondering whether the above could be a good expression for the last, say, three decades of Periodontology which I have witnessed as a professional, a periodontist, university teacher, and researcher [2]. The formulation of a specific plaque hypothesis, the discovery that dental plaque is organized as a biofilm, the possibility of guided and other kinds of tissue regeneration, building up a scientific foundation of, before that very much ailing, implant dentistry, a new paradigm of the pathogenesis of periodontal diseases; and finally the emergence of periodontal medicine have kept us busy in a way, which nobody would have expected who has done his or her undergraduate studies in the 1970s. And then, basic and clinical sciences lately converged in Periodontology leading to the overall impression of scientific progress accelerating at an exponential pace [3].

The knowledge transfer from the teaching and research institutions to the private practitioner was, in all these years, mainly facilitated by commercial companies, which were eager to constantly develop new, sometimes groundbreaking, materials and technologies. Especially in the 1990s, progress was more or less driven by commercial competition, and some University teachers quickly became scientific consultants in small start-ups or bigger oral health care companies.

But while the dental profession greatly benefited from technological progress in these years, the question remained: is all doable also in the interest of the patient?

Well, in my opinion the real revolution started with the implementation of search engines and, in particular, general availability of biomedical databases in the late 1990s. Electronic access to full text articles and journals became available in about 1998. Backfile issues were provided very recently by more and more biomedical journals. That quickly enables us to retrieve the exploding amount of information in a reasonable way and, at the same time, focus on the relevant clinical questions while filtering the evidence.

Periodontology may in fact be a forerunner in the Dental sciences. In several workshops which had mainly been organized by the American Academy of Periodontology, the European Federation of Periodontology and the European Association of Osseointegration, the principles of evidence based medicine [4] had strictly been applied in order to identify fields where evidence was lacking so far. The results had been published in numerous systematic reviews, which represent the highest level of available evidence. Moreover, the quality of reported clinical trials has been improved over the last few years, and more and more dental journals are now applying established standards for reporting clinical evidence such as Consolidated Standards of Reported Trials (CONSORT) in order to facilitate clarity and transparency [5]. As a notable innovation, the new edition of a classical textbook of Periodontology [6]. now starts with an introduction to evidence based medicine, a chapter on assessing the evidence and a third one on evidence based decision making.

Altogether, these developments will have tremendous consequences for us, the teachers and former ‘opinion leaders’, as well. The latter attribute will inevitably vanish. Personal opinions will no longer dominate our teaching. Evidence based medicine can now be introduced to new generations of medical and dental students so that they can find the relevant information mainly by themselves. The teacher develops into a facilitator. And students identify primary knowledge instead of being taught subjective preferences. Application of the principles of evidence based medicine will automatically lead to evidence based decision making and evidence based practice. As DeHart Hurd [7] has pointed it out, the wider knowledge about and skills for providing evidence based medicine will help the health professionals meet the desired educational outcomes in being able to distinguish, for example, theory from dogma, data from myth, evidence from propaganda (advertisement), fact from fiction, knowledge from opinion. Tomorrow’s doctors will be, and have to be, able to gain, assess, apply, and integrate new knowledge in real time, and they must be willing to adapt to changing circumstances throughout their professional life.

In the meantime, basic knowledge and skills for evidence based practice have been demanded and set out for medical students [8]. The most difficult step might in fact be to get students, and even more colleagues, to recognize and admit uncertainties. Practical orientation demands that teaching and assessment of evidence based practice in real time needs to be done in minutes rather than hours or days.

Dental curricula so far hardly provide the necessary skills and competencies for retrieving the relevant evidence so that future dental practitioners (not scientists) will be able to make evidence based decisions for the benefit and in the interest of their future patients (not necessarily those of the dentist). Evidence based practice requires a health care infrastructure committed to best practice, and being able to provide full and rapid access to electronic databases at the point of care delivery.

At least at our University Dental School, one of the most modern institutions of its kind in the world, this might no longer be science fiction. Each dental chair in the student clinic is now connected to the internet. So, focused clinical questions can easily be addressed in real time, i.e., while the patient is still sitting in the chair. If already present, abstract, main message and conclusion of a systematic review may immediately be discussed with the patient and preliminary recommendations given while students are advised to critically read the paper by the patient’s next appointment.

The next few years will certainly see a revolution in dental education and profound changes in attitudes with regard to new developments in Dentistry. Besides being taught the various technical procedures and useful materials, students will now be informed about the results of systematic reviews or, if missing, randomized controlled clinical trials. While this will establish the necessary confidence about the firm foundation of our daily decision making, skills and competencies in critically assessing the current evidence will prevent an entire new generation of dentists from blindly following unjustified promises of commercial companies.

[2] It might be considered somewhat offbeat but I thought the Entire Works of Henry Cow, condensed in a one minute track, would probably fit that purpose well. The avant-garde, musique concrete cacophony representing exploding information and the exalted voice of singer Dagmar Krause expressing hopes and fears might in fact serve as the ideal introduction to my topic.

1 Response to Medical Information Transfer into Practice in the 21st Century: A Revolution