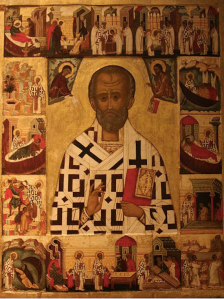 Being fascinated by the DIFFERENCE in culture of Western and Muslim societies, I find the study of differences as much as important as the study of similarities in understanding what separates us. These days see, once again, an almost coincidence of the holiest Muslim and Christian holidays. Only a couple of days ago, two to three million pilgrims assembled in Makkah to perform hajj, the fifth pillar of Islam, which every Muslim is supposed to perform at least once in his or her lifetime if physically able and can afford to do so. Only ten days later, Shi’a Muslims commemorate the designation of his cousin and son-in-law, Ali ibn Abi Talib, as the Prophet Muhammad’s successor. In Iran, Eid-e Ghadeer is even more important than Eid-e Ghorban, the Festival of Sacrifice.

Christians, on the other hand, celebrate and count right now the weeks until Christmas by lighting candles on an advent wreath. It should be a quiet time of contemplation, some spirituality, and with a thorough and thoughtful review of the past year. Impatient kids would perceive these four weeks usually as too long. But the hunt for Christmas gifts may result for adults in more stress than usual as well. The same procedures as every year, I suppose.

What I experience right now in my self-imposed arctic solitude is Christmas overkill. This is a winter-wonder-Christmas country with all houses over and over decorated and illuminated. A true Christmas Disney World with Santa Claus, reindeers, jingle bells, blinking and twinkling tinsel town. People get crazy about Christmas here. The rather depressing darkness for more than two months may be one explanation.

Legend tells that Santa Claus, or Father Christmas as he is called here (are they really the same?) is living at the North Pole, I was told. The 4th century bishop of Myrna in modern-day Turkey, well-known for his secret support for the poor, namely Saint Nicholas (d. 346 CE), has been transformed into sort of a dwarf with a red suit and a pointy hat. One has to remember that Norwegians, if religious at all, are mainly belonging to the Lutheran Church. The great reformator Martin Luther had invented another peculiarity in the 16th century. Since Catholics distributed their gifts on the anniversary of St. Nicholas’ death on the 6th of December, he had created an equivalent for Protestants, the Christkind, whose actual role and function has always been difficult if impossible to understand. It doesn’t play a big role here.

Christmas has been completely trivialized when commerce hijacked it especially after World War II. For so many years the whole country’s economy now more or less depends on business on the four Saturdays before the Holy Night. Christmas is celebrated in Japan and China. Santa you may find even in the Sultan Center in Salmiya in Kuwait, and Arab children are keen sitting on his lap.

I suppose that this is exactly the way how to make one of the more strict Monotheisms with a, sad to say, bad history of crusades and manslaughter (not really better than Islam) in fact harmless. In reducing its main holidays to kitschy and childish symbols in a secular society, its teeth are altogether pulled out at once. Jesus’ message (love, peace) has vanished, too. And, a majority of people living, for example, in Germany do not really know what is celebrated on Easter, not to mention Pentecost.

Yesterday someone told me a joke. We should not forget that Christmas is not only gifts and presents, Christmas tree and tinsel, goose, cookies and chocolate. It is also the Birth of Santa.