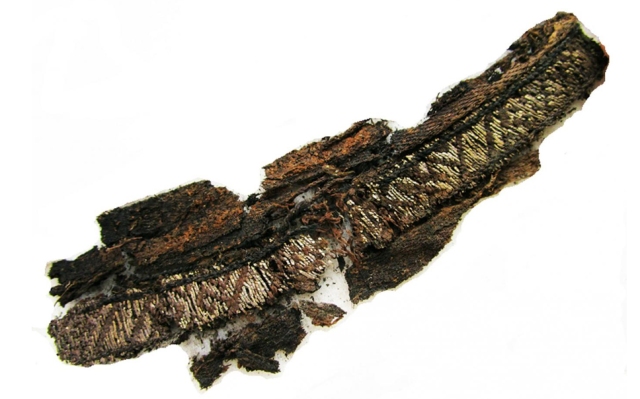 Couple of days ago, it had been reported that a funeral garment, datable to the 9th and 10th century, which had been found in Sweden contains the words Allah and Ali (the name of the Prophet Muhammad’s cousin and son-in-law) in Kufic script. Textile archaeologist Annika Larsson of Uppsala University had re-examined the remnants of burial costumes from male and female boat and chamber graves originally excavated in Birka and Gamla Uppsala in Sweden in the late 19th and mid-20th centuries.

Dr. Larsson assumed that the fragments may have originated from Iran, Central Asia or even China, as some design elements on the fragments reminded her of those she had seen in Moorish textiles. BBC reports that she identified Arabic Kufic script rather than Viking patterns and recognized, with the help of an Iranian colleague, the words Allah and Ali.

I suddenly saw that the word ‘Allah’ had been written in mirrored lettering.

The possibility that some of those in the graves were Muslim cannot be completely ruled out.

We know from other Viking tomb excavations that DNA analysis has shown some of the people buried in them originated from places like Persia, where Islam was very dominant.

However, it is more likely these findings show that Viking age burial customs were influenced by Islamic ideas such as eternal life in paradise after death.

Dr. Larsson has found these two words which always appeared together, in 10 of 100 fragments screened so far.

The BBC also reports that “[a] Viking ring with a Kufic inscription saying ‘for Allah’ was found inside a 9th Century woman’s grave in Birka two years ago.” But the inscription is not square Kufic, allegedly what was identified on the burial garment by Larsson. It is well-known that Viking sailors not only sailed to Greenland and North America but also in the Mediterranean and to the Middle East. In 860 Vikings landed in Sicily, then under Muslim rule.

There was an immediate scientific dispute about Dr. Larsson’s find. When knowing that square Kufic script, which can be seen all over Iran on monuments from Safavid (1501-1735) times onwards, did not occur until 500 years after the Viking age, her hypothesis probably does not hold, says Assoc. Prof. Stephennie Mulder of Islamic art and architecture at the University of Texas in Austin. The style of the design on the Viking fragments is in fact square Kufic. But that was only developed after the 15th century.

There seem to be more problems with Dr. Larsson’s arguments. Professor Mulder writes,

Let’s assume there are 10th century Central Asian textiles with square Kufic. Even so, it turns out Larsson’s drawing doesn’t say ‘Allah’. Instead the drawing says للله ‘lllah’, which basically makes no sense in Arabic. Arabic phrases like الحَمْد لله al-hamdulillah incorporate ‘l-lah’ but don’t stand alone, and it’s spelled لله with two uprights, not three.

The dispute between the two scientists is not over yet. According to The Independent, Dr. Larsson replied,

These finds [the burial garments] are with no doubt from the Viking Age. They are found in several of the Birka graves and Viking Age boatgraves north of Gamla Uppsala. The geometrical Kufi is also to be found in similar textile ribbons from Spain.

Even if the characters should be interpereted as “Illah” it is still Kufic, and as I have understood from the arabic experts it still refers to ‘Allah’.

There was no report on Prof. Mulder’s first argument, i.e., square Kufic scripts only appearing in the 15th century or so.