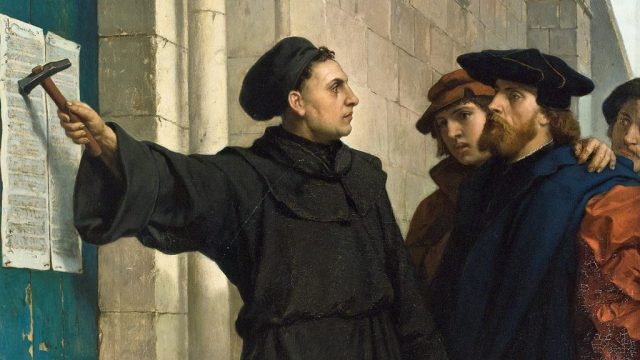 Germany is celebrating 500 years of Reformation of Christianity these days. On 31 October 1517 it is said that monk Martin Luther nailed his 95 theses to Wittenberg’s church calling for some change. It was the beginning of the Protestant Church and caused a remarkable amount of schism, strife, and decades of war. Luther’s violent anti-semitism (now euphemized as anti-Judaism) had even repercussions in the 20th century, culminating in the Nazi’s Endlösung der Judenfrage when the majority of Germans, being  Protestants (but Catholics were callous as well), kept silent amidst the most horrendous genocide in history, the holocaust.

Some question whether Islam does need sort of “Reformation” as well. Those who ask are generally unaware that an age of science and enlightenment happened in Muslim-reigned countries 600 years before Renaissance in Europe. Without Islam’s Golden Age, European enlightenment would simply not have possible.

Now, Martin Luther’s merits include not only Reformation of  rotten Christianity. When translating the Hebrew text of the Tanakh and the Greek Gospels, he would ultimately enable the illiterate crowds to follow the myths and mysteries of church messes and better reflect on what they actually had to believe. Superstition was at work anyway. The Holy Scripture could now be read in German language, and the creation of that particular language resulted in the perception of a nation. And, Johannes Gutenberg had re-invented movable type printing around 1450 in Europe (after the Chinese had invented it in the 11th century), so dispersion of the Word of God was granted.

Apart from his obnoxious anti-Semitism, what did Luther think about Islam? In 1529, Vienna was besieged by the Turks for the first time. It was the maximum expansion of the Ottoman Empire in Central Europe. Turks ruled over much of the Balkans for more than 150 years thereafter.

The Religion and Practice of the Turks

In 1530, Luther published, and wrote a preface to, a treatise on Religion and Practice of the Turks by Georg von Muelbach, in later life a Dominican priest in Rome’s curia. Luther’s preface (which can be found here in an English translation; the 1996 paper by James Boyce and Sarah Henrich contains also a preface by Luther to a contemporary edition of the Qur’an, see below) indicates that he had eagerly attempted to get a copy of the Qur’an in vain and that he had to rely mainly on critical works of secondary literature about Islam. Luther praises the sincerity and honesty of the author of the book and stresses that,

those who only censure and condemn the base and absurd characteristics of the enemy but remain silent about matters that are honest and worthy of praised do more harm than good to their cause. What is easier than to condemn things that are manifestly base and dishonest (which in fact refute themselves)? But to refute good and honest things that are hidden from sight, that is to further the cause, that is to lift up and remove the scandal, to despoil the messengers of their counterfeit image of the light and to render them appropriately hateful because of their base plundering of the light.

It is amazing to read Luther’s almost admiration of customs and rites of the Muslims, in particular as he condemns Catholic Church.

[W]e see that the religion of the Turks or Muhammad is far more splendid in ceremonies — and, I might almost say, in customs — than ours, even including that of the religious or all the clerics. The modesty and simplicity of their food, clothing, dwellings, and everything else, as well as the fasts, prayers, and common gatherings of the people that this book reveals are nowhere seen among us — or rather it is impossible for our people to be persuaded to them. Furthermore, which of our monks, be it a Carthusian (they who wish to appear the best) or a Benedictine, is not put to shame by the miraculous and wondrous abstinence and discipline among their religious? Our religious are mere shadows when compared to them, and our people clearly profane when compared to theirs. Not even true Christians, not Christ himself, not the apostles or prophets ever exhibited so great a display. This is the reason why many persons so easily depart from faith in Christ for Muhammadanism and adhere to it so tenaciously. I sincerely believe that no papist, monk, cleric, or their equal in faith would be able to remain in their faith if they should spend three days among the Turks. Here I mean those who seriously desire the faith of the pope and who are the best among them. The rest of the mob and the greater part of them, especially the Italians, those swines from the band of Epicurus, who believe absolutely nothing, are secure from every heresy and error, strong and invincible in their Epicurean faith, armed as much against Christ as against Muhammad or against even their own pope.

For this reason, therefore, we are publishing this book and thrusting it in the face of the opponents of the gospel, so that, confused as they are in their own foolish opinions, they might actually experience and feel with their own hands that what the gospel teaches is true. For the gospel teaches that the Christian religion is by far something other and more sublime than showy ceremonies, tonsures, hoods, pale countenances, fasts, feasts, canonical hours, and that entire show of the Roman church throughout the world. Indeed, in all these things the Turks are by far superior. Nevertheless, they continue to deny and ardently persecute Christ, no less than our papists deny and persecute him. May they finally then grasp this truth, namely, that the Christian religion is by far something other than good customs or good works. For this book shows that the Turks are far superior to our Christians in these things as well.

There is, of course, lots of circular reasoning in it. For Luther, the Muslim faith is nothing but heresy.

Since we now have the Turk and his religion at our very doorstep, our people must be warned lest, either moved by the splendor of the Turkish religion and the external appearance of their customs, or offended by the meager display of our own faith or the deformity of our customs, they deny their Christ and follow Muhammad. Rather let them learn that the religion of Christ is something other than ceremonies and customs and that faith in Christ has absolutely nothing to do with discerning what ceremonies, customs, or laws are better or worse, but declares that all of them squeezed together into one mass are not enough for justification nor are they a work for them to perform. Unless we learn this, there is danger that many of our people will become Turks, disposed as they are to much less splendid errors.

For Muhammad denies that Christ is the son of God, denies that he died for our sins, denies that he arose for our life, denies that by faith in him our sins are forgiven and we are justified, denies that he will come as judge of the living and the dead (though he does believe in the resurrection of the dead and the day of judgment), denies the Holy Spirit, and denies the gifts of the Spirit. By these and similar articles of faith consciences must be fortified against the ceremonies of Muhammad. With these weapons his Qur’an must be refuted.

A Preface to Bibliander’s Edition of the Qur’an

But anyway, once Luther had got a copy of the Qur’an (Bibliander’s was the third translation into Latin after those of Robert of Ketton in the 12th and Mark of Toledo in the 13th centuries), he became much more critical of Islam. In 1543, three years before his death, he wrote the preface to a Qur’an edition by Theodore Bibliander, a Swiss Orientalist and linguist. His hatred towards the Jews is in full swing, but now he adds the Muslims and Catholic Church in his rants.

[A]s I have written against the idols of the Jews and the papists, and will continue to do so to the extent that it is granted me, so also I have begun to refute the pernicious beliefs of Muhammad, and I will continue to do so at more length. But in order to do this, it is also useful to study closely the writings of Muhammad themselves. Accordingly, I have wanted to get a look at a complete text of the Qur’an. I do not doubt that the more other pious and learned persons read these writings, the more the errors and the name of Muhammad will be refuted. For just as the folly, or rather madness, of the Jews is more easily observed once their hidden secrets have been brought out into the open, so once the book of Muhammad has been made public and thoroughly examined in all its parts, all pious persons will more easily comprehend the insanity and wiles of the devil and will be more easily able to refute them. This is the reason that has moved me to wish to publish this book.

There were very few people who had, at that time, had a look at the Holy Scripture of Islam, and Luther has to be praised in a way that he wrote an, albeit utterly critical, preface to it. He concludes,

The following corollary assertions provide a source of great encouragement: Just as the church of God is eternal, so it is fitting that the church’s teachings be eternal; yet this book [Bibliander’s edition of the Qur’an] witnesses that this creation of Muhammad is a new thing. The church of God by necessity embraces the prophets and apostles; Muhammad rejects their teaching. In the church of God from the very beginning this voice of the gospel has always been handed on: that the eternal Father willed that the Son of God become a sacrifice for sins; Muhammad scorns this sacrifice and propitiation. In the church the doctrine has always existed concerning the causes of human weakness, calamity, and death, and especially concerning sin passed on after the fall of the first parents; these Muhammad, as if an Epicurean, considers to be inane fabrications. Finally, the book itself gives rise to many other assertions whose enumeration would hardly edify the pious.

Given the fact that the Qur’an is completely incomprehensible for unprepared Western readers, Luther’s conclusion doesn’t come as a surprise. It actually took another 500 years for Western scholars to make some sense of the Qur’an in context of late antiquity.

According to Boyce and Henrich (1996) , apart from the two prefaces, Luther had written about Islam in couple of treatises: